Set on the backyard of the Himalayas, Nepal’s first national park The Chitwan National Park is home to an incredible variety of wildlife including several endangered species. Established in 1973 to protect the wildlife of the lowland terai, this park of 932 sq. km., is unrivalled in the diversity of its life forms and leader in advanced biodiversity conservation techniques and policies.

Inside the park, you will discover a lost world of towering trees and twisting vines, of pre-historic rhino and lumbering elephants, of crocodile, python and deer; of brilliantly colored birds and if you are fortunate – the superb Bengal Tiger. Around 300 one-horned rhinos make their home in the lush forests of Chitwan, along with several wild species.

In rivers draining the Chitwan, Narayani and Rapti, you will find a diversity of revering wildlife including the endangered fish-eating gharial crocodile and the marsh mugger crocodile. Moreover, Chitwan is a paradise for bird-watchers with over 528 species of resident and migratory birds identified so far. The endangered Giant Hornbill, the Paradise Flycatcher, the Large-Pied Kingfisher and the Racquet tailed Drongo are among the more exotic resident birds of Chitwan.

Because of a primary destination crowned “The World Heritage Site in natural category”, the National Park offers a wildlife experience which ranks with the best in Asia. Man’s interaction with the environment over many centuries is very evidence in the Chitwan National Park. These treasures represent the cultures, persons and events that played a role in the making of the park and are conserved along with the park’s natural assets. The most easily accessible amongst Nepal’s national parks, Chitwan is considered by many naturalists to be simply the best managed park in Asia.

Location
Chitwan National Park is about 160 km from the capital, Kathmandu. Driving to Sauraha takes 5 hours and it takes just 25 minutes flight to Bharatpur airstrip, and then drive of next 25 minutes with buffer zone views along the way. It is 155 km far from Lumbini and 145 km from Pokhara. Another exciting option is to travel to the national park via aluiserly two-day rafting trip on Trishuli River. After the arrival of Sauraha, the Resort is places just opposite to the Elephant Riding Center, near the Rapti River. Go to the road in front of the Elephant Riding Center and take the right turn and the fascinating Hotel Jungle crown will be at your sight after walking down few meters. 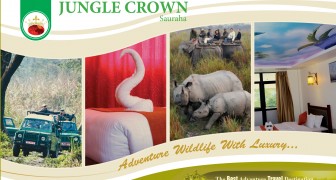